I’ve often looked at the style sheet I’ve created for a book I’m working on and thought that the words listed could be used as writing prompts. ‘Pick any three consecutive words and write 1,000 words based on them’, sort of thing. I even tweeted about making the executive decision that ‘asshat’ is one word but ‘fuck-head’ takes a hyphen. I think you can guess the tone of the book just from that! Shortly afterwards, I saw a discussion on Twitter about how a style sheet is a microcosm of the book as a whole. ‘How true!’ I thought.

So here you go. Some selections from recent pieces of work. I think these all give a good flavour of the piece without giving away any spoilers – and if you want to use them as writing prompts, that’s even better!

The featured image is my latest artwork, just because I didn’t have anything else to illustrate this with and I’m trying not to use stock images. You can see more of my artwork here.

On rare occasions someone pays me money for something that isn’t editing. No, not that, you dirty-minded people! If you’ve been reading my ‘About me’ section with the thoroughness that I’d expect, you’d have found that tiny one-word link to my art gallery. In my precious spare moments, I often put pen to paper. As Valentine’s Day is coming up, I decided to do something a little more commercially friendly for a change! So, still shopping for a card or gift? Here are a few designs you might consider:

This is slightly larger than A4 size, completed and ready for shipping – a one-off!

Roughly card-sized … individual variations available. I can do you something like this from scratch.

Again, pretty small, about the size of a rather small card, and I can produce these on demand or something similar with lyrics and customisation of your choice.

So there you have it! If you like my style and are short of inspiration, or want something for your partner that is a bit different but not ‘too much’/over the top, look no further. Drop me a line and I’ll be happy to work to your requirements.

Every now and then I like to get out of my cave and meet people face-to-face – especially writers, naturally! Today I went to the Leicester Writes Writers Meet Up (see, I resisted the temptation to insert an apostrophe and/or a hyphen there!) and saw a few familiar faces from the festival back in June, as well as meeting some new people too. I always find it inspiring to hear writers reading their work; this evening was no exception.

I have to big up Farhana Shaikh from Dahlia Publishing for organising these events – she does a great job.

If you live in the Leicester area and are interested in attending writing-related events, I recommend you join the Leicester Writing Events Facebook group, which pulls together everything writerly that’s happening in the area.

I don’t have any photos from this evening, so here’s a completely unrelated doodle. 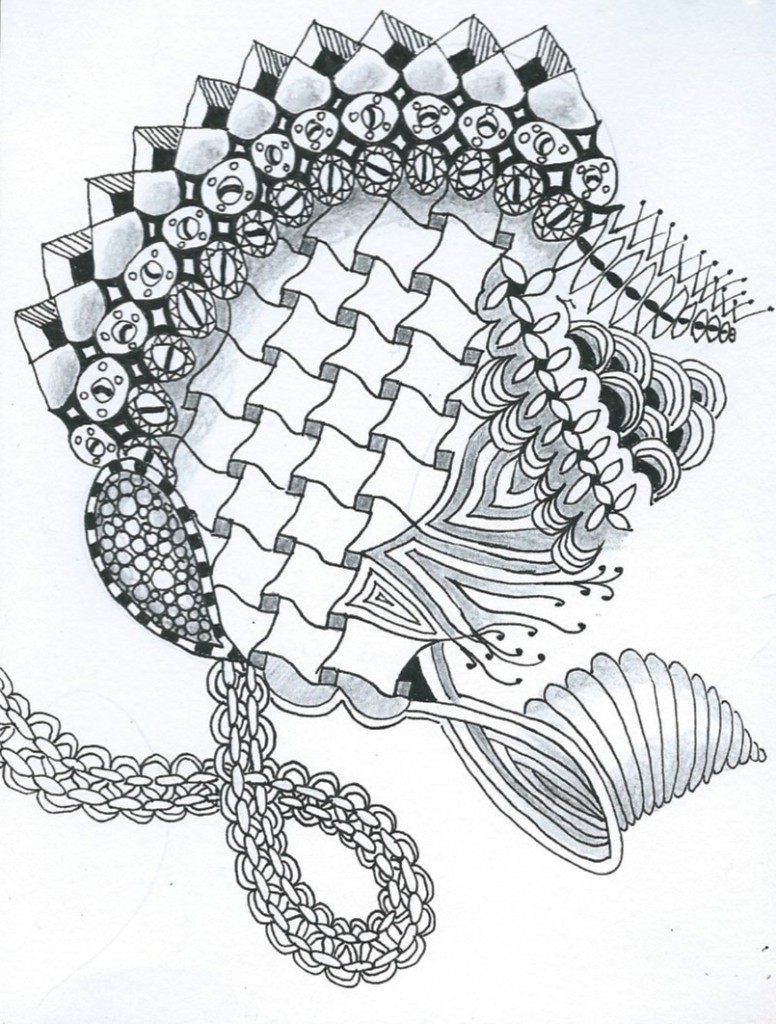 I was worried that they’d be printed upside down or that the colours would turn out looking completely wrong, but never fear. Printed.com did me proud. Now I just have to get on with writing them!

Finally finished my Christmas card 2015! I’ve sent the file off to the printer now, crossing my fingers that I’ve got the file setup right and it doesn’t come back printed on the wrong side of the fold or upside down or just plain weird.

Last week the candidates had to write, produce and sell a children’s book in three days. That’s right – one day to write it, one day to get it made (complete with illustrations and design work) and one day to sell it into stores large and small. The tasks on The Apprentice are getting a bit tired and samey after ten years of the same formula, but this one was right up my alley.

At first I was cringing as I watched Sam wax lyrical about Aristotle and the Snottydink, but by the end I wanted his team to win as I liked his enthusiasm and creative spirit! At least he was thinking about the plot and the overall ‘message’, unlike the other team who did have a plot, but one that wasn’t accurate in the information about honey production that it was trying to convey to its young audience. Nothing gets my goat quite like a children’s book that is wrong, wrong, wrong about something factual.

Sam seems like such a nice guy, I want him to do well in the process but usually it seems that the most horrible characters do the best on The Apprentice so I fully expect the final four to be Richard, Charleine, Selena and Vana, or possibly Brett.

I think the episode went a good way towards illustrating why writing a children’s book isn’t just as easy as A, B, C. I definitely have a lot of admiration for the graphic designers who came up with the visuals in just a day!

That reminds me, I need to finish off – start, actually! – the artwork for this year’s Christmas card… I got off to a good start with my watercolour sketch, but my first full size effort was doomed to failure after the masking fluid didn’t behave quite like I thought it would.

Halloween marks a turning point in the year; in England we’ve recently put the clocks back and the nights start to arrive earlier and last longer. The spirits of winter are breathing down my neck, so I thought it was time to get the watercolours out for the first time in years and have a little practice before embarking on the larger painting that will be this year’s Christmas card. So, without the aid of masking fluid, we have my first attempt at a snow scene… 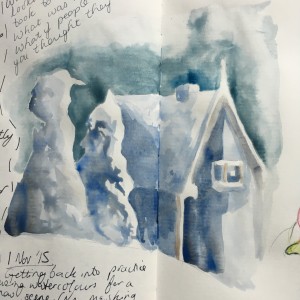 I’ll be a lot happier working on a larger scale, but the snow fits my mood.