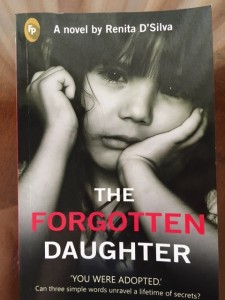 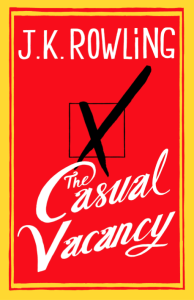 I’m a little late to the party but I finally got my act together and read The Casual Vacancy.

I’ll give the elephant in the room a pat on the leg straight away and come clean that yes, I’ve read all the Harry Potter books. I’ve also read quite a lot of reader reviews of The Casual Vacancy so I knew enough to expect something completely different from Harry Potter. I mean, it’s a book about a vacancy on a parish council. Just how magical did people think it was going to get?

Opinion seems to be divided and I thought I’d be one of those people who either hate this book or love it. Having finished, I can honestly say that I feel conflicted. The whole thing had good and bad points.

I’m not one of those people who thinks that JK Rowling’s writing style is terrible. I enjoyed the Harry Potter books and thought her style worked well in them. I would describe it as ‘workmanlike’. It’s functional, which lends itself well to stories which revolve around plot and character. It also suits a magical world because when the things and situations in your story are fantastical or out-of-the-ordinary you don’t need an overblown swathe of purple prose to describe them. You just need to give the reader’s imagination space to work.

However, I don’t think this translated so well to The Casual Vacancy. The book focused on ordinary people doing ordinary things, and the ordinary prose in my opinion failed to lift the whole thing above, you’ve guessed it, ordinary.

The story arc focuses on the ‘casual vacancy’ on the Pagford parish council and the machinations of various villagers to get their favourite candidate to fill it. There are clear ‘goodies’ and ‘baddies’ – the reader is obviously meant to side with the candidate who wants to keep The Fields estate with its drug and deprivation problems within the boundaries of Pagford, along with its addiction clinic. The other candidate wants the sink estate to be someone else’s problem, and favours redrawing the boundaries in order to shunt The Fields off to nearby city Yarvil – which has plans to close the addiction clinic down.

There is also a third candidate, who seems to have been thrown into the mix for no real reason other than to make the situation slightly less ‘good vs evil’. Although you can’t root for him as he’s a complete arse.

The book starts off with the death which creates the casual vacancy and then settles down into a series of character studies. There are a lot of characters to get to grips with. Some people found this confusing; I didn’t find it too bad, if a little slow-moving.

The plot progressed by means of little vignettes from each character’s point of view in turn. It’s a good idea, but I thought it was just a bit too slow to make for a great novel in this case. Part of the problem for me was that I was never interested enough in the outcome. A parish council sounds boring on the surface, and when I read the book description I assumed that Rowling had teased some drama out of the tensions that undoubtedly arise on these kinds of committees, but I was disappointed. There was only one scene where the parish council actually meets, which I expected to be a pivotal point with some excitement, but that scene fell completely flat.

Some readers didn’t like the amount of swearing. It didn’t bother me particularly as I thought it was a fair representation of actual speech, but I didn’t like Rowling’s habit of writing ‘in dialect’ for the characters from The Fields. That’s just a personal preference; I’m not a fan of that practice in general. I prefer to learn where a character is from and ‘hear’ their accent in my head.

The characters weren’t very likeable and the outcome wasn’t a happy one, but I don’t have a problem with that. It was billed as realism, and realism it was. The teenage characters were well-drawn; the adults often stereotypical. The descriptions of life on the sink estate rang true (I used to live on one very like it!) and it was refreshing, in a way, to read about an estate like that in a rural, superficially idyllic area. Most stories involving hard drug use seem to be set in cities, as though it never happens in the green belt.

I don’t mind unlikeable characters, but I did rather warm to Samantha – getting older, bored with her boring husband and regretting the travelling she missed out on in her younger days following an unexpected pregnancy and shotgun wedding. None of this applies to me except the very first part, but I think Samantha and I could get on!

There is one character who is meant to be ‘nice’ – Barry Fairbrother, who dies at the beginning of the book. Although he’s painted as some kind of saintly champion of The Fields, I don’t think he’s fleshed out enough to become more than just a cipher, which is a shame because he is so pivotal to the story.

My verdict: the love child of Miss Read and Irvine Welsh but not approaching their talents. Pedestrian with some redeeming characterisations. Three stars out of five.